The video clip above is me talking about The Future. Shot in 1998. I was 36. I came across this by accident on a tape I was re-using.

The same day I came across this by accident, today, fourteen years later, I am getting Bell Fibe TV installed, which is exactly what I was talking about in the video clip!

Broadband high-speed Internet service (25 Mb/s) with IPTV over DSL over the phone line for content delivery.

The term “port” crops up in IP networking, particularly in the context of rules in routers and software firewalls. One hears about “opening a port on a firewall” and “TCP ports” and “UDP ports”.

So just what is a “port”, exactly?

Like about 40% of the words in English after the Norman invasion of southern England following the Battle of Hastings in 1066, the English word “port” is French. Une porte is a door.

Of course, the French got it from Latin: porta (gate, door). The Latin word portus (port, harbor, and earlier, entrance, passage) and the Greek word poros (journey, passage, way) are obviously related.

In the computer hardware business, a port is a doorway into the machine: a jack, where a cable can be connected. In days past, there were serial ports and parallel ports on PCs. Today, we have USB ports and LAN ports. Technicians talk about connecting customers to ports on access equipment, for example, equipment with banks of modems.

Why is this necessary? Since there can be many computer programs (a.k.a. applications, apps) running on the same computer at the same time, when trying to communicate to a particular program, we require a mechanism to identify it, a way of telling the host computer to which program to relay our communications.

For example, we all know that it’s possible to have multiple applications using the Internet connection on a computer at the same time. Think of an Outlook email program and a Chrome browser program running at the same time on a PC connected to the Internet.

When data arrives at this computer, how does the computer know whether this data is for the email program or for the browser program? And how does it convey the data to the correct program?

The answer: every program is assigned a number called a port number. Your browser is assigned port 80, for example.

Visiting our warehouse service a couple of weeks ago, I was struck by the analogy possible between the idea of computer ports and a multi-tenant warehouse, so whipped out my Android smartphone and took a picture with the totally cool panoramic feature.

The warehouse is analogous to the host computer. It has a single street address. It handles goods for multiple users. Users have space allocated inside the warehouse. The warehouse has (on this side) six ports, also called loading docks. Each port has a number. A user can be assigned a port, either temporarily or permanently.

To communicate goods to that user, they’re carried in a shipping container (IP packet) on a truck (Ethernet frame) over a road (LAN cable) to the warehouse at its street address (IP address). To get the contents of the shipping container delivered to the correct user, the truck is backed up to the appropriate loading dock (port) identified by its door number (port number) and the contents of the container are unloaded to the space behind that port.

In computer communications today, the port number is 16 bits long, and the source and destination port number are populated at the beginning of the transport layer header, Layer 4 of the OSI model. The world’s most popular standard protocols for implementing the transport layer are the TCP (Transmission Control Protocol) and UDP (User Datagram Protocol). 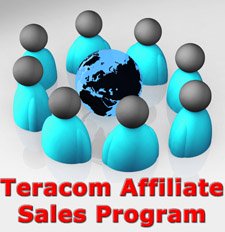 Teracom is the leader in telecom and network training courses, developed and refined over twenty years. Teracom training courses now available online are top-notch, top-quality and right up to date.

To be accepted as a Teracom Sales Affiliate, you’ll need to have an established web site or blog with sufficient daily page views by unique visitors, and place descriptive text and graphics describing Teracom courses on your site.

Not only will you earn 20% of net proceeds from students who are referred from your site, becoming a Teracom Training affiliate adds prestige to your site, and may complement other content on your site or add to other training affiliations you may have, making your site in turn more valuable.

There is no cost to become a Teracom Sales Affiliate. There are, of course, terms and conditions that must be respected, including a minimum sales level that must be maintained to remain in the program.

To begin the process of becoming a Teracom Sales Affiliate, please complete the “contact us” form, stating that you would like to apply to join the Teracom Affiliate Sales Program, and include the address of your website.